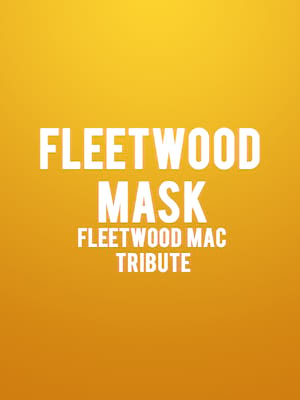 The East Bay Area-based group's strong suit is its Stevie Nicks character, who not only looks a lot like Stevie, but sounded almost spot-on like the legendary singer. Not to mention her amazing wardrobe, which depicted the gypsy woman persona with panach

Endorsed by Mick Fleetwood himself, Fleetwood Mask formed in 2010 fuelled by their mutual adoration of the British-American rock phenomenon. Branching out from their home base in the San Francisco Bay Area, the passionate sextet quickly rose to national attention as one of the finest Fleetwood Mac tribute acts in the business, bringing a touch of theatrical flair to proceedings by donning masks whenever they perform live.

The outfit is led by frontwoman Claudette Rodrigues, who is not only a dead ringer for the legendary Stevie Nicks but a powerhouse vocalist to boot. Utilizing note-for-note recreations of Fleetwood Mac classics like Landslide, Rhiannon, and The Chain, as well as costumes that replicate the original band's distinctive style, Rodrigues and co conjure the band in their prime - if you close your eyes you wouldn't be able to tell the difference!

Sound good to you? Share this page on social media and let your friends know about Fleetwood Mask - Fleetwood Mac Tribute at American Music Theatre.